There are many sensors to measure temperature on the market, but Raspberry Pi does not have an ADC (analog to digital converter), so analog temperature sensors like TMP36 can not be used directly.

Here we will measure temperature by connecting the digital sensor DS18B20 directly to Raspberry Pi.

There are several kinds of DS18B20 sensors available on the market. There are some original circular sensors as shown below, and there are some sensors that DS18B20 sensors have been slightly modified so that they can be easily used on an experimental interface board such as Arduino. Both have all the same performance and features, but with slightly different array locations of connector. Considering only the position of the pin, everything is the same whatever you use

The DS18B20 has the following features.

The DS18B20 uses a 1-Wire bus protocol developed by Maxim, which is a bus communication method using one control signal, and the microprocessor (the master device) identifies devices connected to the bus and issue commands with a 64 bit code assigned to each device. This means that multiple devices can be connected to one bus simultaneously. In this method, there is no conceptual limit to the number of devices that can be connected on one bus.

In the DS18B20, the control line requires a weak pull-up resistor because all devices are connected to the bus via a 3-state or open-drain port (DQ pin of DS18B20). Usually a pull-up resistor of 4.7KΩ or 10KΩ is used.

For more detailed information on the DS18b20, please refer to the followings:

The DS18B20 sensor using a 1-Wire protocol is installed in parallel to the bus. All sensors use the same data pin. Connect the data line to pin 7 (BCM port 4) of Raspberry Pi.

The following is a case of configuring the circuit in the manner that supplies external power to the sensor by using the 3.3V power supplied from pin 1 of Raspberry Pi.

Raspbian/Occidentalis supports 1-Wire bus protocol used by the DS18b20. If you want to use 1-Wire protocol, you need to activate the protocol first.

Modify "config.txt" file and reboot the system. If "/sys/bus/w1/" folder is created, it is normal processing.

If the folder is not created, activate the device with the following procedure using "modprobe" command, and verify that the above "/sys/bus/w1/" folder is created again.

When the 1-Wire bus protocol is activated normally and the Raspberry Pi and sensor are connected, the measured value from the sensor is interfaced to the specific file of Raspberry Pi. The interfaced data is generated under "/sys/bus/w1/devices" folder.

Check the contents of the folder to see if a folder of "28-xxxxxx" format is created. This folder refers to a specific sensor installed in the 1-Wire bus protocol. If this folder is created, it indicates that Raspberry Pi is normally connected to the sensor and interfaces measurement data of sensor.

The temperature values measured by the sensor are stored in "/sys/bus/w1/devices/28-xxxxxx/w1_slave" file.

If you check the contents of the file, it will have the following format.

Here, the data of "t=nnnnn" format in the second line is Celsius temperature degree measured by the sensor and the value divided by 1000 is used. The above value will be "27.875 CEL".

Here we will write a program that reads the data interfaced to "/sys/bus/w1/devices/28-xxxxxx/w1_slave" file of Raspberry Pi and displays it on the screen.

We use uses Python 3 for program development language. Start Python 3 IDLE, write the following Python program, and save it in "sensor_temP_DS18B20.py" file.

Here is a look at the contents of the above program.

■    This sets the device file that interfaces with the sensor to "/sys/bus/w1/devices/28-xxxxxx/w1_slave".

■    This reads the file repeatedly until the first line of the file has the value "YES" at the end.

■    When a temperature measurement value comes in, this reads the value starting with "t=" and convert it to CEL temperature and FAH temperature.

Execute the following program with "sudo" command on Terminal screen. The temperature value measured by the sensor will then be displayed continuously on the screen. 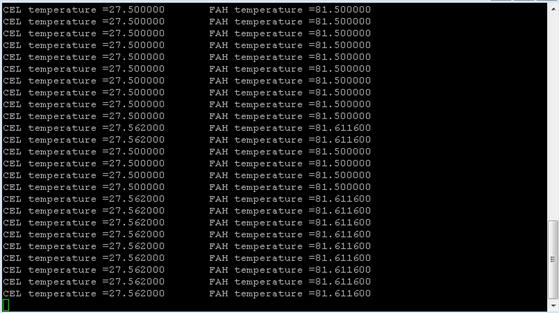